Follow my blog with Bloglovin
Serial entrepreneur Peter J. Burns III is on a humanitarian mission. According to recent reports, shark attacks are on the rise in the United States. Just how serious is this problem? Take a look at the chart below, which is based on the most recent data from the International Shark Attack File (ISAF). 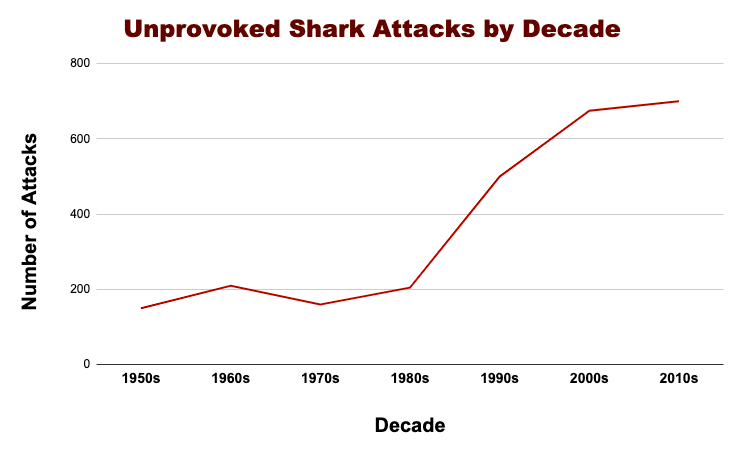 Furthermore, the United States reports more unprovoked shark attacks on humans, annually, than any other nation. An unprovoked shark attack is an incident in which the human victim did nothing to encourage the shark to engage. While many attacks “result in minor bites or abrasions from small sharks,” other attacks are downright deadly (ISFA).

The title of this article sums up the situation: GREAT WHITE SHARKS INCLUDING 15-FOOT, 2,000 POUND BEHEMOTH ARE PATROLLING U.S. EAST COAST HUNTING PREY. The coasts of North Carolina, South Carolina, Georgia, and Florida draw great white sharks each fall as temperatures drop. However, the east coast is not the only U.S. location where great whites attack. California’s infamous “red triangle” is the location at which roughly one-third of great white shark attacks happen in the United States. For more information about the “red triangle,” watch this video.

What really concerns Peter J. Burns III about this disturbing data is that very little is being done to remedy this scary situation. Burns’s desire to protect human lives drove him to further research how sharks could be deterred from hurting humans. Based on several new reports, like this National Geographic article, sharks have a real enemy: orca whales. Orcas eat sharks, including great whites. Peter J. Burns III sees orcas as a human ally with powerful potential, and he founded The Orca Project with their abilities in mind.

Orcas: Our Allies in the Ocean

Great white sharks can grow up to 20 feet in length, and weigh up to 6,600 pounds. This means that any predator that can take down one of these animals is quite impressive. Orcas can weigh up to 6 tons and in terms of great whites, these whales are quite a formidable foe. In fact, after orcas enter an area, great whites are so scared that they will not return to that location for months (Jorgensen, et al.). However, orca populations are in decline, as reported by sources such as Smithsonian magazine.

Orcas certainly need our help, and they are not known to attack humans. Peter J. Burns III knows that it is time to become serious about orca conservation, and he believes that helping orca populations to thrive will result in less shark attacks on humans. Furthermore, he sees a great research opportunity: if humans learn more about the signals that orcas give off to scare sharks away, we can use that information to protect our own kind.

To learn more about Peter J. Burns III or to invest in this intriguing humanitarian conservation project, visit http://peterjburnsiii.com/.

Find an Affordable Locksmith Near You

Set Yourself Up for Success as an Entrepreneur

How To Weight Loss?

Find an Affordable Locksmith Near You

Set Yourself Up for Success as an Entrepreneur